Unknown (appears to be in her late teens to early 20's)

Alpha Protocol
Sis is an elite member of G22 and the bodyguard of Albatross. He states that she is a mute, as well as an orphan. She meets Michael Thorton in Moscow during Operation Blood Feud.

Most of the existing information on Codename “Sis” comes from Interpol records, ones that were isolated when a computer virus attacked their servers in 2006 and erased almost three years of evidence compiled on G22.

Sis relies on two revolvers as her favored weapons. While she is a marksman with both, she frequently needs to reload in order to keep using the weapons - assuming her first few shots do not take out a target, it is recommended that agents take advantage of the pistol's reload to subdue her.

Footage of Sis's fighting style has been captured by Interpol after an unsuccessful attempt to apprehend her in a train station in the Ukraine. Believing the G22 agent to be unarmed, Interpol attempted to subdue her, but discovered they were unable to get close enough to Sis to land a strike - her small size and agility allowed her an incredible advantage in taking cover, using the station pillars, trains, and even passengers at the station to avoid apprehension and escape easily.

Sis' locket is more than just a childhood memento, it's her only way of expressing her current place in the world… and her fear of what it holds in store for her, Albatross, and G22. The fact she relinquished the locket shows considerable trust.

"..."
— Sis
"It's Sis' locket... it's got an image of St. George on it. Guess it didn't protect her from me..."
— Michael Thorton (reflection upon interacting with her locket if the choice was made to execute her)

A mission listed in italics means that mission does not need to be completed to complete a full playthrough. The word (Determinant) means this character may possibly appear in that mission if the correct conditions are met. 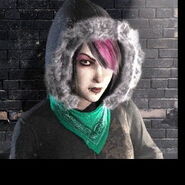