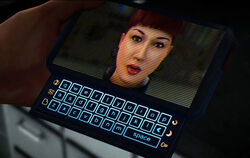 At the beginning of the game, Michael Thorton is given a personal digital assistant (always referred to as a PDA) when he awakens in the Graybox. Alpha Protocol leaves this device on the counter for him to find. This PDA will be one of the devices he most often uses throughout his missions. It acts as a PDA and a communication device throughout the game, with numerous people contacting Michael via video call.

The PDA serves as the gameplay menu of the game, allowing players access to one of the two pause menus with access to the various sub-menus of the game. The accessibility and capabilities of these sub-menus can differ depending on whether the player is inside a safehouse or on a mission. The Inventory sub-menu allows the player to access their equipped weapons and attire (clothing or armor) and equip/change the modifications available/installed. This menu is accessible both inside a safehouse and in the field, with the difference being the access of all weapons, armors, and modifications being restricted to the safehouse while only modifications already equipped before the mission may be removed and new modifications picked up may be installed during missions. The Intel sub-menu allows players access to either the mission list (from a safehouse) or the mission map and objectives (during a mission), and also allows players to read over the dossiers accumulated on known individual or faction contacts or targets. The Service Record sub-menu allows players to view their skills, their accumulated perks, and gameplay statistics. and also view maps whilst on missions. The PDA is accessed by pressing TAB on PC, Select on PS3 and Back on XBox 360.

Retrieved from "https://alphaprotocol.fandom.com/wiki/PDA?oldid=11336"
Community content is available under CC-BY-SA unless otherwise noted.