Somewhere in his 20's

Michael Thorton is the playable character and main protagonist in the game Alpha Protocol. He plays a major role in the world crisis following the crash of a commercial airliner. While he is inexperienced in the field, Thorton shows promising skill. When Thorton finds himself cut off from his contacts, he must rely on every weapon in his arsenal in order to keep the peace.

Thorton can actually be customized to the player's liking to a certain degree.

Before he joined Alpha Protocol, he was either a soldier, spy, tech specialist, freelancer, recruit or veteran. His background changes depend on his chosen classes. Regardless of choices, it seems he was an expert in his field or have some talents in them that interested a secret agency. He also fluent in several languages other than English as well. According to Westridge, Mike volunteer to be recruited and the reasons are either, want to change things instead of office work, go explore the world and for the thrills or just duty as it is responsibility to serve his country. No matter what, he will still be kidnapped for his recruitment test and most of his items were confiscated.

He first woke up in the medical bay of Graybox facility and contacted by Mina through a PDA. He soon proceed to escape the area and knock the guard out while a mysterious captor is taunting him. He soon go through several area before reaching the interrogation room and confronted by the mysterious captor, who is revealed to be Yancy Westridge, and is ask to pass through orientation. Mike soon pass all orientation and gone through hazing and learning process with Westridge about conversations, dossiers and effect it can bring before given the mission to track Shaheed and missiles in Saudi Arabia in Operation Desert Spear.

Mike arrived at Saudi Arabia and was briefed about the missions in Saudi Arabia to track Shaheed down: find the arms dealer and question him about the missiles sales, bug an Al-Samad airfield to track the flight logs as Shaheed is suspected using and investigate an Al-Samad detention camp where it is suspected to have the missiles kept. Mike do all the missions and found the Shaheed and the missiles location which prepare his final mission. Mike managed to catch Shaheed and revealed that the missiles were sold to him by Halbech which intrigued Mike, he either kill Shaheed, let him go or arrest him which he died by a missile attack in the latter. Soon, he is warned by Mina that missiles had come to his path and survived the attack. Mina revealed there is a Halbech mole in Alpha Protocol and he is declare rogue. He quickly escape Saudi Arabia but met a photojournalist, Scarlet Lake, in an airplane which they established contact. He arrived at the Greece Safehouse and discuss their operations against Halbech with three leads: the missiles that transported through Moscow, an Al-Samad cell has activated in Rome and a planned assassination against President Ronald Sung. With three operations, he set out to stop Halbech plans for World War 3.

Mike arrived at Moscow and receive three missions involving his objective to locate Halbech missiles: Contact a local and famous informant, Grigori for information about Halbech, investigate the train yard that suspected to have the missiles located and where Halbech transport its goods and find Lazo, a Russian mobster who is involved with Halbech. When he contact Grigori, he found out Sergei Surkov might know who the Halbech contact in Moscow and he is at the US Embassy. As he investigate the trainyard, he encounter SIE and VCI mercenaries attack the Russian mobsters who is protecting the trainyard. He found out the missiles are not here and decide to destroy the weapons or reroute to himself or Grigori. Next, Mike investigate the yacht Lazo is in and got the data, but he is ambushed by Sis and G22 agents. He dealt with them and either he spare or execute Sis. He soon contacted by Albatross and ask to contact directly if Sis is spared. They soon contact each other at the park and agree or disagree to ally or not. He soon prepare to go to the US Embassy where Surkov is with the help of SIE or Albatross. Regardless, he infiltrated the US Embassy and found out VCI/G22 had attacked the place. He found Surkov whether in friendly or hostile terms, he soon managed to defend the embassy and contact Surkov. Mike either interrogate him or come down to his office and talk about Halbech contact. After founding out Halbech contact is Brayko, he attacked the mansion with the help of the previous handler.

Mike arrived at Rome and receive three missions involving investigating Al-Samad actions in Rome: Infiltrate an CIA post to gather more info, bug an NSA post for more info and go to Al-Bara home to investigate his involvement with Al-Samad. Mike is also informed about Conrad Marburg, ex-Halbech Chief of Security in Rome, working with VCI. During these missions, he either kill any people or not in either of these missions. Mike also founds out a VCI employee named Madison St James is investigate on him. When investigating Al-Bara, they confirmed he is leader of the Al-Samad cell in Rome and had some financial crimes but appears contradictory. Mike either spare him or assassinate him. He soon receive a letter from a Halbech employee or Al-Bara himself. He went to the meeting and found out it was a trap set up by Conrad and they both talk about Mike actions, Marburg history and a warning, leave Rome or he will face consequences.

The Agent History chosen at the start of the game represents character classes. Classes determine Michael Thorton's background before being recruited for and joining the top-secret agency Alpha Protocol. The player's choice of class/background determines Thorton's history, previous training, and reason for recruitment. These are chosen from one of six different backgrounds: Soldier, Tech Specialist, Field Agent, Freelancer, Recruit, and Veteran. Each character background is described in background and specialties in both the game manual and the game's selection menu. An in-game e-mail can found on a laptop in the Graybox just outside the three orientation test rooms, sent by Yancy Westridge to all Alpha Protocol personnel, also describes Michael's experience and previous career accomplishments. The class/background chosen determines Thorton's backstory as well, and can also give Thorton interactions/dialogues unique to certain backgrounds. Each class comes with specific allocations of skill points (pre-determined skills and skill levels) with two exceptions, though no matter which class is selected, the player can choose to reallocate said points to whichever skills one wishes while selecting the background of one's preference.

Mike personality is depend on the player actions. His personality can be depend on different stances like Professional, Suave and Aggressive. He can be straightforward, focused, and have an agent personality, funny, cool and joking or an impatient, unfriendly and angry. According to his psych profile, he can manipulate people into his way like with Conrad Marburg.

"I know. Execution, imprisonment, possibly another lecture from Westridge."

— Michael Thorton talking with Mina Tang in the aftermath of Operation Desert Spear (Default dialogue)
"You ever been a pushy woman in the heart of Saudi Arabia?" (Scarlet Lake) 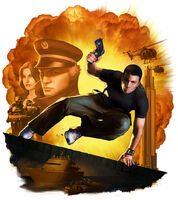 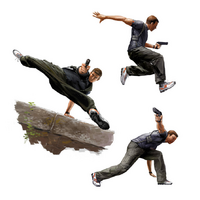 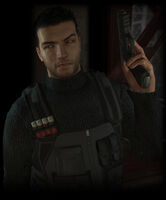 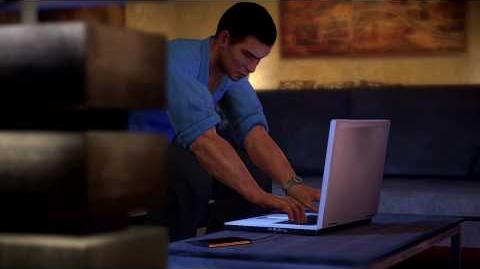