Marburg's Pistol is a unique weapon. A pistol used by Halbech Agent Conrad Marburg is a possibly obtainable weapon by (rogue) Alpha Protocol Agent Michael Thorton during their confrontation in the Roman Musuem of Art. This weapon is seen for the first time during that moment by Thorton, and is obtainable if certain conditions are met beforehand that result in Marburg's death following their duel.

The weapon seen wielded by Conrad Marburg is a Beretta 92FS. There is some ambiguity in the exact model type of 92FS seen. The one seen in Marburg's hands before Marburg's death in Rome differs from the one used by Michael Thorton afterwards. The former is a dark metal (arguably black) pistol. The one obtained afterwards is a clean silver-gray metal pistol with a black-bottomed magazine and black controls (safety switch, slide release level, disassembling latch, trigger bar, and trigger). One possibility is that the gun changes from a Beretta 92FS to a Beretta 92FS Inox once in the player's possession as an oversight in game development common in many games. Another possibility is that the gun seen wielded by Marburg is a Beretta 92FS Inox under different lighting and severely unpolished, supported by the fact that the gun seen in his hands is not actually a black gun, but rather a dirty gray metal. The latter would suggest that Thorton cleans and rebuilds this gun upon obtaining it.

Used by Conrad Marburg for decades, this venerable service pistol has been lovingly maintained. The serial numbers have been filed off and the barrel replaced numerous times to ensure no two killings ever leave the same ballistic fingerprints. 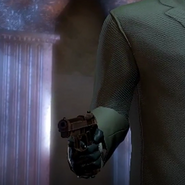