Edit
watch 01:36
We're Getting Mutants in the MCU - The Loop
Do you like this video?
Play Sound

Colleen O'Shaughnessy
Madison Saint James is a character in the Alpha Protocol. She works as a part time translator and file clerk for the VCI faction. She is a major NPC in the Rome hub. Madison encounters Michael Thorton in Rome during Operation Deus Vult. She had come across Thorton's name in a VCI office working for Conrad Marburg, finding a file marking him for death. She contacts Thorton with the hopes of warning him, inadvertently involving herself in the conflict between Thorton and Halbech.

Madison Saint James has been in Italy less than a year. Her resume on file at the Veteran Combat Initiative lists her as fluent in Italian and passable at a few other languages, enough to land her a part-time job working for the VCI as a translator and file clerk. Nothing in her file lists her as being anything but professional in carrying out her duties.

Though Madison hasn't been at the VCI branch office long, her work ethic and skill set caused her to be assigned as Marburg's executive assistant in Rome (Marburg goes through assistants rapidly). She has access to sensitive material, though as most of it is in code, she had little idea what most of it meant until finding the file on Michael Thorton. She doesn't seem to know the full extent of what the VCI do besides recruit ex-military and offer up private security.

Madison took her job with the VCI as a second job to cover her expenses in Italy. Her initial job was working in restoration at the Museum of Roman Art and Archeology in Rome, but it didn't pay well, so she was forced to seek out other employment - she came from America with little to nothing to her name. According to notations in the museum computer regarding her interview, she cited a desire to study art history abroad, but she hasn't taken any classes or programs (at least formally) since her arrival in Italy.

Madison received a recommendation as an art student from a gallery owner in New Hampshire, but there's no mention of a "Saint James" family tied to the gallery owner - in fact, the trail of Saint James stops in New Hampshire entirely. There is no paper trail, certificate of name change, or anything else to confirm her identity.

Secret Fact: Madison Saint James took her mother's maiden name shortly before leaving the United States, due to a parting of the ways with her father, Alan Parker. According to Madison, her mother met Parker while he was working overseas and was unaware of his government connection until they returned to the States. There doesn't seem to be any connection between Madison's presence in the VCI and Parker's presence there, so this seems to be an unusual coincidence. Judging from Madison's attitude, however, Parker cared very much for his daughter, even if he didn't show it... if anything were to happen to her, there's no telling what he might do in response. 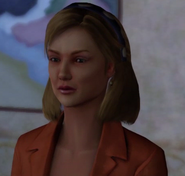