The protagonist of Alpha Protocol, Michael Thorton, can use a karambit knife to quietly eliminate enemies. The player can unlock the stealth kill once they've attained a certain rank in martial arts. Mike can stealth kill from behind the target: clamping a hand over the hostile's mouth and cutting their throat. He can also stealth kill from the front: slicing the hostile's throat quickly while stepping forward.

The karambit knife is a curved-bladed combat knife originating from Eastern Asia. It is used by inserting the index finger into the safety ring and tightly holding the grip. The hooked blade allows for slashing and hooking motions, the blade is often swung instead of stabbing motions. Karambit knives are used by modern day special forces operatives. 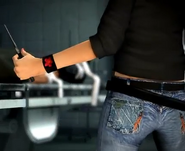