Contact Albatross (Endgame) is a mission in the end game.

Entire conversation is based on previous mission results. Sit back and watch the movie.

Secret Fact: Albatross (given at the end of the conversation) 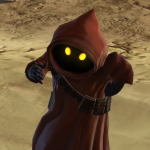