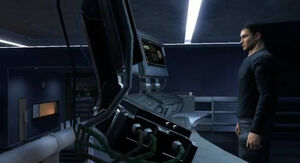 Computers are found throughout the world of Alpha Protocol, the personal computers of Michael Thorton in his safehouses or the ones he finds in the field.

Through his personal computers used during his missions in Saudi Arabia, Moscow, Rome, and Taipei, or his laptop at once he finishes his goals, Thorton can access his e-mails, or buy gear from The Clearinghouse.

The computers Mike finds in the field can either be hacked or sliced via tuned EMP charges. These computers will yield information, emails between his targets, or hidden bank accounts that Thorton can obtain money from.

Retrieved from "https://alphaprotocol.fandom.com/wiki/Computer?oldid=11915"
Community content is available under CC-BY-SA unless otherwise noted.