For the faction, see: Alpha Protocol

Alpha Protocol is a third-person espionage action-role playing game, developed by Obsidian Entertainment and published by Sega. It was first announced by Sega during a press conference on March 13, 2008. The game was released on Microsoft Windows, Xbox 360 and PlayStation 3 platforms on May 27, 2010 (AUS), May 28, 2010 (EU), June 1, 2010 (US)

In 2010, an American commercial passenger airliner prepares to take off out of Saudi Arabia. It just makes it off of the runway, reaching minimum altitude to begin the flight. Suddenly the airliner is shot down in a sudden, massive fiery explosion, crashing before it leaves Saudi Arabia and killing every single passenger on board. Flight 6133 is quickly revealed to have been shot down by surface-to-air missiles, controlled in a precision strike as an attack on America by the Middle Eastern terrorist organization Al-Samad. The anti-American terror organization holds the goal of driving America out of the Middle East completely, despising everything American and holding such as corrupt and morally bankrupt. The leader and the mastermind of said organization, Saudi Arabian Oil baron Sheikh Ali Shaheed, planned and subsequently takes credit for the attack in a news broadcast of grand declarations.

Unknown to most and kept secret from the American public as well as the world, the missiles used to shoot down the American airliner were American made, designed by the Halbech Corporation and thought to have been stolen in secret. Furthermore, the missiles used to destroy the airliner was just the first used in an entire stockpile of missiles thought to be in the possession of Al-Samad. This knowledge is something the American government cannot afford to be made public. The "Voice of Al-Samad," Ali Shaheed and the organization as a whole having possession of an entire stockpile with which he could wreak havoc is also something that cannot be allowed to continue, should his attacks do more harm to Americans (or garner blame towards America for allowing said missiles to be stolen in any future attacks on other targets).

Wanting to rectify the problem secretly, without the need of diplomacy or procedure that would make the rushed timeline required impossible, the government calls upon one of it's most secret agencies in existence. The mission to recapture the missile stockpile from Al-Samad in secret and deal with their problematic leader, no matter the unconventionality or illegality, is sanctioned. Alpha Protocol, both the name used by the agency in question as well as a term describing a government agent gone rogue and acting without government sanction, is authorized to launch this mission, codenamed Operation Desert Spear.

At the same time, a new agent named Michael Thorton joins Alpha Protocol from another area of government employ. He enters the agency with remarkable brilliance in his former field - the requirement of all Alpha Protocol Agents. Upon joining the agency, he is selected to undertake Operation Desert Spear. But he soon discovers that not all is as it seems, with Al-Samad, Alpha Protocol, or the actual downing of that airliner using the Halbech-made missiles. He soon uncovers a massive international conspiracy that threatens the political stability of the world targeting key cites and nations in chain-reaction attacks and plots. The next three months are suddenly a heartstopping race against the clock and a battle against grand forces, as Thorton must navigate a secret world of secrecy, danger, and conspiracy to prevent World War III.

Alpha Protocol is played from a third-person perspective, allowing the player to see Thorton and his surroundings at all times. As Thorton is a trained CIA operative, the tools at the player's disposal include numerous firearms, hand to hand combat using Kenpo, and spy gadgets.

In addition to the action elements, though, players also earn Advancement Points, which can be placed into any of the ten different skills in the game. These skills will increase Thorton's ability to use certain weapons and grant different abilities to him. These abilities are free to use, but require a "cooldown" period before they can be used again. One ability that has been mentioned in previews allows Thorton to scan a group of enemies in slow-motion before popping out of cover and shooting each of them more rapidly than he would be capable of normally.

As with any RPG, Alpha Protocol features numerous characters with whom to interact. Conversations occur in real-time, giving the player a limited amount of time to respond at key "decision points" during dialogue. The dialog system in the game - known as the "DSS" or Dialogue Stance system - allows the player to choose from three different attitudes, or "stances," when speaking to an NPC. Obsidian has said that these options are based on the personalities of the "three J.B.'s": Jason Bourne of the Bourne Identity novels and films, James Bond of the eponymous film and book series, and Jack Bauer of the television series 24, although the game itself does not use these names. During dialog sequences, the player will be able to choose from options like Professional (Jason Bourne), Suave (James Bond), and Aggressive (Jack Bauer), sometimes with a brief description of the dialogue choice (such as "sarcastic") taking the place of the general stance. A fourth, "action" dialogue choice is sometimes available, used to terminate a conversation prematurely. Each NPC will react differently to these choices; one character might be intimidated by an aggressive stance, but another character may find an aggressive stance to be insulting or childish. While dialogue choices will have some immediately noticeable consequences, many may not be seen until much later in game. As each conversation is experienced once per playthrough, multiple playthroughs will be required in order to experience all of the game's content; while the game contains a total of approximately twelve hours of cinematic sequences, a player will only experience around four hours during any given playthrough.

Alpha Protocol has a hub structure, in which Thorton must utilize safehouses in each of his hub cities in order to lay low between missions. From a safe house, Thorton can change clothing, access a weapons locker, telephone contacts, and attempt missions. Some missions are critical to the progression of the story, while others are optional. Players will be able to buy and sell weapons and equipment within their safe houses. Hub cities include Rome, Moscow, Taipei and a city inside Saudi Arabia.

Players will be allowed to customize Michael's face, but only features such as facial hair and the like. Weapons and gadgets will also be customizable with added silencers, a larger magazine, and so forth.[1]

The player can choose also which skills to advance, allowing them to reinforce their play style. Examples include making Thorton more capable of stealth, more deadly in hand-to-hand combat, or better at gunplay.

A large list of guns are shown in some demos as well, mostly under fictional names. Some exceptions to this are the FN Five-seven, FN P90, the FN F2000, and the M4A1.

The theme to Alpha Protocol was written by electronic producer and artist Brian Wayne Transeau, better known by his stage name, BT.[2]

The minimum and recommended requirements are: 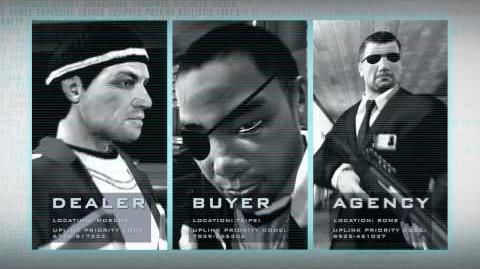